Nathan Bowen is a Chancellor’s Fellow and Ph.D. student in Music Composition at the CUNY Graduate Center. As a student of Amnon Wolman, Nathan’s compositional interests have veered toward interactive media, improvisation, and audience participation. Nathan has written music for a variety of genres, including film, theatre, commercial and chamber music. Recent awards include the Graduate Center’s Robert Starer Award in composition, the George Perle Award in composition, and the Herbert Sukoff Award in composition. He has received degrees in composition at Queens, College, CUNY (M.A.), studying with Jeff Nichols and Bruce Saylor, and Brigham Young University (B.M.), where he studied with David Sargent, Michael Hicks, Murray Boren, and Stephen Jones. 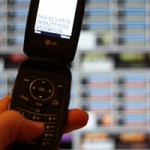 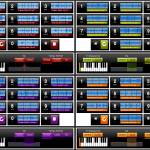 Using Josh Minor’s OSCemote , I recently was able to get an iPhone to work as a controller. Ideally many phones, platforms, apps, and controllers will integrate with the server patch, which is created with Max/MSP. The goal is to make available as widely as possible a way for participants to make and record collaborative music in real-time.

Below you can see a video demonstration of Nathan’s project: