Feminist identity in the rap song Ni Una Menos by Rebeca Lane: multimodality, territories, and the audience’s response on Youtube 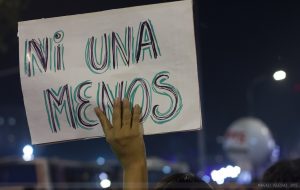 In 2015 Ni Una Menos emerged as one of the recent developments of the Latin American feminist movement that has gained important international recognition. Ni Una Menos is the name of the movement, chants in the streets, graffiti, drawings, lyrics, clothes, tattoos, and hashtags. It exemplifies the complexity of the interaction of offline-online spaces with technosocial events and technopolitical activism that challenge the study of feminism as a community of practice and the way we approach language as part of feminisms.

In this digital project, I approach the complexity of Ni Una Menos by studying one of the songs that are named after the movement: Ni Una Menos by the Guatemalan rap artist Rebeca Lane. Therefore, the topic of this research is the multimodal expressions of feminist identity in Ni Una Menos by Rebeca Lane taking into consideration the lyrics, the video, and the comments to 2022 on the official video, which was published on her official YouTube account on November 11th, 2018. For selecting this specific song, I considered the relevance of the artist and the territory where she is from.

This is an exploratory work for my doctoral dissertation in which I will study the multimodal expressions of feminist identity in the Spanish-speaking Americas from a glottopolitical perspective. Therefore, this research asks the following questions:

With these questions, I want to understand the relationship between language-feminism, subjects, territory, and the online-offline space The New Media Lab is a place to explore the challenges of mixing arts-based methods and multimodal data visualization. The final product of this activist project will be a digital presentation of the results with text, infographics, illustrations, and maps available on linguisticafeminista.com.