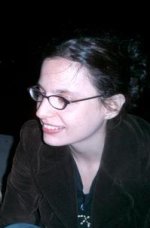 I am one of two Durst Scholars at the New Media Lab working on the construction of the Virtual New York web site. As a Ph.D. student in the History program at CUNY, my interests converge around urban history, gender, and material/visual culture. Currently, I am looking at how assumptions about gender and family influenced the design and tenancy of PWA public housing developments. In the past my research has considered the impact of department stores and movie theaters on Brooklyn’s diverse population in the 1920s; visual literacy and moviegoing in Weimar Germany; and the iconography of the kitchen in women’s magazines of the 1930s. I hold an M.A. in Cinema and Cultural Studies from NYU and a B.S. in Radio/TV/Film from Northwestern University in Evanston, IL.