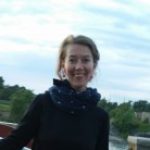 Camilla Skoglie holds a Bachelor of Arts from the University of Oslo with a major in Comparative Religion. Having spent the past several years working as a freelance actress across various stages in New York City, she is now pursuing an MA in Liberal Studies at the Graduate Center, CUNY, with a concentration in Data Visualization. She is a member of the New Media Lab where she is developing her Capstone Project which analyses historical immigration to the US through language data from the US Census Bureau.