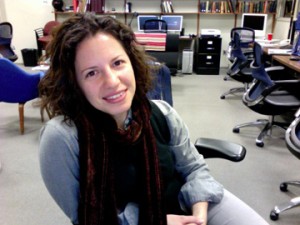 Hillary Miller hails from Flatbush, Brooklyn. She received her B.A. in Theatre and Women’s Studies from Dartmouth College, and later earned an M.F.A. in Dramatic Writing from New York University’s Tisch School of the Arts. She taught at Kingsborough Community College and the NYC Department of Education before beginning her doctoral work in the Theatre Program at the CUNY Graduate Center. Her areas of interest include performance and urbanization in post-World War II New York City, visual culture in the 20th century, and urban development and cultural policy.

She has previously been employed as a literary associate at Young Playwrights, Inc., as well as a script analyst and researcher for director/producer Steven Shainberg (Secretary; Fur). She is currently the Assistant Director of the Summer Writers Lab, a fiction immersion at the Brooklyn Campus of Long Island University. Since 2008, she has been a Communications Fellow at the Bernard L. Schwartz Communication Institute at Baruch College, where she works with faculty, staff, and students to support undergraduates’ development as confident, purposeful and effective communicators.