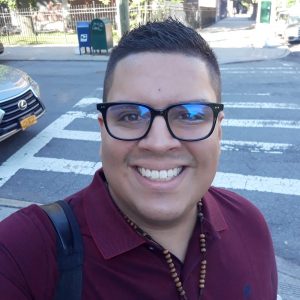 Joseph A. Torres-González (He/Him/His/El) is a Ph.D. student in Cultural Anthropology, and in the Certificate Program in Interactive Technology & Pedagogy Program at the CUNY Graduate Center. He holds a master’s degree in Anthropology and a Certificate of Graduate Studies in Latin American, Caribbean, and US Latino Studies, both from the State University of New York, University at Albany. Joseph has been a Library of Congress Junior Fellow (2021) creating a digital research guide (LibGuide) at the Science, Technology & Business Division. He has also worked as a research assistant at the CUNY School of Public Health, and as a MAGNET Fellow with the CUNY Pipeline Program. His research interests are at the intersections of food, history and anthropology, political economy, and popular culture, focusing specifically on coffee culture (baristas, farmers, and consumers) among the Spanish-speaking Caribbean diasporas. Joseph focuses his pedagogy on the development of Open Educational Resources (OER), along with creating accessible teaching, research, and classroom materials for students, colleagues, and other community members. He has taught at City College, Lehman College, Montclair State University, and Hofstra University, and currently teaches at the Department of Anthropology at Brooklyn College and Queens College, CUNY.