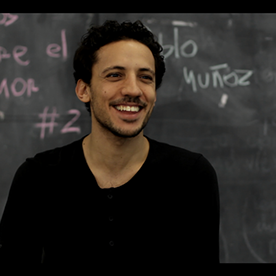 I am a Visual Communication Designer graduated from Facultad de Arquitectura, Diseño y Urbanismo, Universidad de la República, Uruguay, where I am also an assistant teacher and researcher.

My thesis, orientated by Professor Mónica Farkas, was focused on dance notations systems as case studies of visual communication design, work that was published by the University in 2016. Currently I am working on my MA thesis in Liberal Studies (Data Visualization track) at the Graduate Center, CUNY, which deals with the transnational contacts between dancers, designers and visuals artists from Europe and Uruguay in the 1940s, particularly on Alexander and Clotilde Sacharoff in their exile in the Río de la Plata region.

I have studied modern and contemporary dance since 2003 in Uruguay, and also taken workshops in Brasil, Argentina, United States and France. As a choreographer I have created and managed more than five dance pieces in collaboration with several artists from the Uruguayan dance community, such as Marcelo Marascio, Claudia Pisani, Marcos Ramírez, Sofía Lans, Juan Miguel Ibarlucea, Mariana Porciúncula and Federico Lucas. I was granted the Justino Zavala Muniz fellowship for dance creation in 2014-15 from the Ministery of Culture of Uruguay. Recently, in NYC I have participated in Landing 2.0 coordinated by choreographer Miguel Gutierrez and taken part in the Graduate Center’s Futures Initiative course “Public School” assembled by visual artist Paul Ramirez Jonas and art historian Claire Bishop.
Photo by Leonor Grasso (Uruguay)