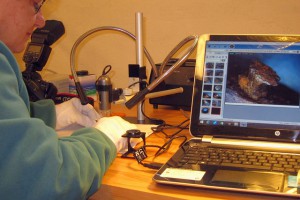 Paddy Colligan is a PhD candidate in Archaeology at the CUNY Graduate Center. She has excavated in several places, most of them relatively cool even in summer (Alaska, Iceland, Newfoundland). Immediately after getting her BA she went into the Peace Corps where she taught French in Ghana (very cool culturally). After extensive post-Peace Corps travel in Africa, she went to Johns Hopkins School of Advanced International Studies (SAIS) receiving an MA in African Studies. After an unconnected career in graphic arts, she received her Master of Library Science from Rutgers and worked many years as a librarian at Time Warner and as a high school librarian. However, when she later completed her MA in Anthropology, she had to agree with one of her students that, indeed, being an archaeologist was “way cooler than being a librarian.” For her dissertation project she is examining the nature and cultural impact of iron use in the pre-contact Arctic.

In the New Media Lab Paddy is currently working on an online searchable collection of her digital images of Arctic peoples’ tools that have (or had) iron components or were made using iron tools. She is also using GIS to map the distribution of metal tools in the pre-contact Arctic.