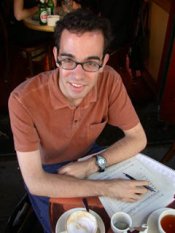 Peter Kirn has worked collaboratively in various media including dance, spoken word, music, and video. He has collaborated with choreographers Kathy Westwater and Christopher Williams, and poets and spoken word artists Tyrone Henderson, Todd Colby, and Christina Springer, and performer/writer Elizabeth Zimmer in performances at venues like PS 122, HERE Arts Center Dance Theater Workshop, the Flea Theater, the Clark Studio Theater at Lincoln Center, Williamsburg Arts neXus (WAX) and many others. His music and video creations have been featured internationally, including performances in Bulgaria and Korea and at conferences such as the Society for Electro-Acoustic Music US (SEAMUS) and Society of Composers (SCI); his choral music has been televised on CBC and TV-5 Europe. His video work has been featured at SEAMUS, New York’s Tenri Gallery, and the Eyewash VJ/motion graphics series and Eyewash DVD. He is co-founder and co-curator of the Meme performance series and a co-founder of the Graduate Center Contemporary Ensemble.

Kirn is also known as a technology expert. He has presented workshops throughout the country, including conferences like Macworld Conference & Expo, National Symposium on Music Instruction Technology, and the O’Reilly OS X Conference, is a regular contributor to Keyboard, MacDesign, and Macworld Magazines, and is the writer of a new reference material on computer music for Peachpit Press due spring 2005, Real World Digital Audio.

He is currently completing a Ph.D. in Music Composition at the CUNY Graduate Center, where his teachers have included Thea Musgrave and Tania Leon. He has received an M.M. from Brooklyn College (CUNY) and a B.A. from Sarah Lawrence College, where he was recipient of the Theodore Presser Prize. Kirn has taught Electronic Music as Guest Faculty at Sarah Lawrence College and is an Adjunct Lecturer of Music Theory and Computer Music at Hunter College (CUNY).