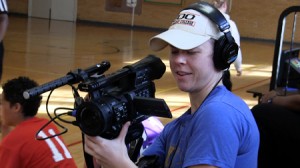 Stephanie M. Anderson is a Ph.D. Candidate in the Critical Social Personality Psychology Program. With her academic pursuits, she has been interested in using film throughout the research process and in particular as a means to engage in public discourse. She recently completed a Graduate Certificate in Documentary Media Studies at The New School, and her final documentary short, “purple shoelaces,” premiered at the HBO Theatre in May, 2012. As a complement to her dissertation, the film is a portrait of the Women’s Division of the New York City Gay Basketball League and explores experiences of gender, sexuality, and camaraderie on and off the court. Stephanie’s dissertation more generally examines constructions of gender, sexuality, race, and competition in a national sample of men’s and women’s gay-identified recreational sport leagues in the United States. She also teaches courses in Psychology of Women and Human Sexuality at Hunter College and is a part of the Videography Fellows Program through the office of the Provost at the Graduate Center.