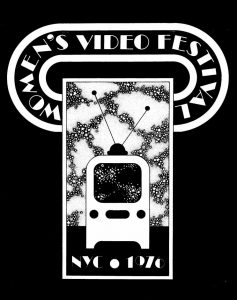 My project aims to create a digital archive of the 1970s New York Women’s Video Festivals (NYWVF). Founded by Steina Vasulka and organized by artist Susan Milano, and coordinated by Ann Volkes and Shridhar Bapat, among others, the festivals represent a significant, but largely forgotten moment in feminist media. Originally hosted by the Kitchen, an avant-garde intermedia art venue, the festivals were eventually moved to the Women’s Interart Center, a hotbed of feminist art and politics in Hell’s Kitchen. Featuring tapes, sculptures, and viewing environments created, produced, or directed by women, the NYWVF included work by seminal video artists like Joan Jonas, Shigeko Kubota, and Susan Mogul, alongside more didactic and activist oriented tapes by grassroots collectives and guerilla television community groups. The digital archive of the NYWVF will bring together videos from these artists and collectives involved in the festival over the course of its run during the 1970s, alongside agendas, reviews, and more recent artist interviews. In doing so, the NYWVF digital archive offers a corrective to current historical narratives of video art, which overemphasize the work of individual artists at the expense of activist collectives, while offering insight into the beginnings of 1970s feminist media politics.