History of Disability and the “600″ Schools in New York City 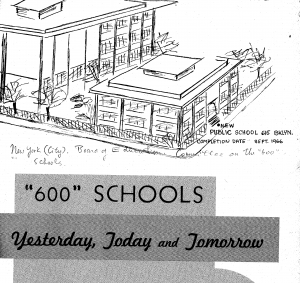 My project focuses on the inception of specialized programs in New York City schools for children classified as maladjusted, delinquent, and emotionally disturbed, and the eventual uneven distribution of this classification among students of color.

Throughout the early 20th century the New York City Board of Education (BOE) began examining the effects of truancy and maladjustment among public school students. Beginning in 1929, a special commission was convened to investigate the problems of “truancy” and “personality conduct” among New York City’s youth.

While early programs attempted to address the changing post-War labor market by providing guidance on the ways in which issues such as military demobilization, delinquency, dropout rates, and employment affected access to equal educational opportunities, a second narrative of truancy and maladjustment developed with the city’s increasing black and Puerto Rican populations. “Troubled” children within the black community were characterized by educators as delinquent and unmanageable.

By 1947, the BOE announced the opening of twelve special schools for maladjusted youth, known as the “600” schools. At the outset, the first “600” schools served a predominantly white population of students with emotional “disturbances” in a specialized program aimed at helping them reintegrate into general education (and society). As the city’s demographics continued to change, and the fight for school integration emerged, the mission of the “600” schools changed as well.

In the wake of Federal policies to desegregate education in the United States, and against the backdrop of the struggle to integrate New York City Public schools that led to the largest teacher strike in the city’s history, the “600” schools and special education served as an effective tool for the removal and isolation of black and Puerto Rican students. By the 1970s, the “600” schools paved the way to what is known today as District 75, the only completely segregated school district for students with disabilities in the country. As with the “600” schools, District 75 contains a disproportionate number of black and Hispanic students who are classified as “emotionally disturbed” and removed from their community schools.