The Jail of Mountjoy, is an attempt to aurally represent the various obscured linguistic rhythms and polyrhythms hidden within Joyce’s secretly euphonious work, Finnegans Wake. This is mainly accomplished through ‘translating’ the variously buried levels of reference as different musical ‘strains’, extracted through a mixture of a musical synthesizer, logarithmic Wake annotations, and a Flash-facilitated ‘reader.’ Contrary to its initial appearance, the project itself is not simply an exercise in ekphrastic futility—or arbitrarily translating one medium through another—but rather a means of clarifying necessary undercurrents otherwise unapparent in Joyce’s work. Though the words themselves are polyglot and at times schizophrenic-seeming, composed of various non sequitured puns spliced together at will, there is a central glue of musicality beneath the linguistic tricks. Surprisingly simple ‘melodies’ and ‘jingles’ are buried beneath the baroque proselytizing on Italian mathematicians and Old Testament jargon—the blend of ‘low’ and ‘high’ ultimately made manifest in Joyce’s wending of highbrow hymns with subway advertisements, Hail Marys with jingles about hair tonics. 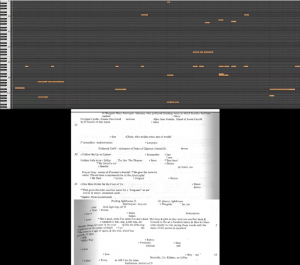 What this project has done, then, is attempt to tease out these various strands of reference, ‘low’ and ‘high’ alike, by assigning different linguistic categories—musical, historical, professional jargon—to different musical octaves, thereby allowing one to aurally ‘hear’ the various melodies, climaxes, and movements of individual references. Using the canonical Annotations to Finnegans Wake by Roland McHugh and its spatially-presented breakdown of Joyce’s language as a sort of sheet music, the synthesizer has been set to ‘play’ each reference’s octave as it is reached on the page. As the Annotations are calibrated such that two lines correspond to one line of the Wake, the “Jail of Mountjoy” adapts this metrically to two Annotation lines equaling one second of ‘music’—a 35 line segment of Issy’s “Night Lessons” from the Wake then producing a 17.5 second composition.

Additionally, as the Wake is itself a mimetic representation of a single dreamer’s, or a universal human dreamer’s, progression through the night, the Wake‘s linguistic density similarly waxes and wanes according to the particular moment of ‘frenzy’ or REM thickness of the dream. This project seeks to make these changes aural, or else more readily notable to the reader (rather than steering by the rather oblique guidelines of ‘difficult’ changing to ‘insanely difficult’). This is meant as a pragmatic tool, but also as an opening into Joyce’s own chaotic mechanism of allowing various strains of linguistic, musical, and jargonal ‘tones’ to intersect and breed with one another in novel and unpredicted ways.

As Joyce was, after all, a ‘lewd bard’ far more than a clinical, and audience-ostracizing technician, this project’s central intention to mark a swing back to that original definition.