Pothole Citizenship: Mapping from the Ground Up in Jackson, Mississippi 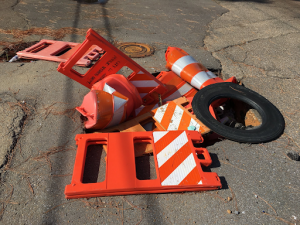 Pothole Citizenship: Mapping from the Ground Up in Jackson, Mississippi engages in the relationship between urban mobilities, road infrastructure, and inequality in the southern United States. In addition to anthropological literature on urban space and infrastructure (Brown 2005; Dalakoglou and Harvey 2012; Heiman 2015; Larkin 2013; and Monroe 2016), it builds upon a broad range of interdisciplinary scholarship that examines the wide-ranging social, political, and economic factors impacting mobilities and transportation systems in the United States (Gilroy 2001; Hunter and Robinson 2018; and Jakowitsch and Ernst 2004) in order to ask questions about how and why roads fall apart and the systems of meaning embedded in the detours they require others to take. Potholes matter because residents point to them to theorize their city. This project focuses on the small breakdowns, disruptions, and damages in order to problematize the presumed neutrality of failing road systems, and understand how and why roads conditions are politicized. This mapping project, encouraging a social space where community members in Jackson can describe, compare, and share their experiences with potholes, opens opportunities to better understand roads, local politics, and the unevenness of urban space.