The sentiment analysis project investigates patterns in order to visualize emotional dispositions found in two corpora of texts. Text analysis software and topic modeling will be employed to define trends for possible comparison. The goal is to identify concepts that orient us toward a history of emotions in comparative literature. The study’s research question pertains to which emotions were assigned positive and negative value.

Studying emotional responses to precarity and scarcity in what marks the beginning and the end of the cold war in Spain (1940s) and Cuba (1990s), I seek to broaden the scope of Hispanic Transatlantic Studies. At the moment, my study focuses on Cuba as part of my dissertation Emotional Cultures: Narrative Written by Cuban Women during the Special Period(1992-2005) 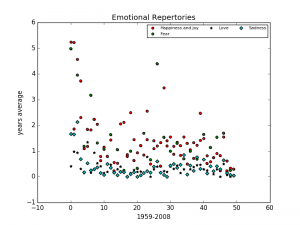 I have previously noticed that envy and resentment were often used in post-war Spanish narrative to invalidate the individual in the “enemy” category. So, I wondered what emotion, if any, was used in the Cuban case. Coding a set of 1444 speeches (delivered by Fidel Castro, except a few exceptions), I noticed that fear is a category that delineates the enemy. The enemy sows fear before the Revolution with its abuse of power and during the revolution by stirring animosity, division and distrust.

Fear is dangerous and it is a conduct that reveals lack of conviction. It does make sense, because while the Spanish civil war was portrayed by the official discourse as a fair war in which both sides could have won, and therefore, the losing side needed to accept its luck. Rather differently, the Cuban Revolution was always a David vs. Goliath story against the economic interests of the rich and powerful. The one who fears has something to loose or hide. In the 1990s things change. New economic measures, such as the goal of attracting 10 million tourists, placed the government in a position in which the investors’ fear of communism was not despised but acknowledged.

At the LASA 2016 conference I will present a paper on emotional lexicons in four short stories written by women during the 1990s. The idea is to perform a comparative analysis of the varied premises informing emotional standards in the primary literary texts. (All graphics are preliminary drafts, please do not share). Here is a graph of predominant emotional lexicons using LIWC 2015: 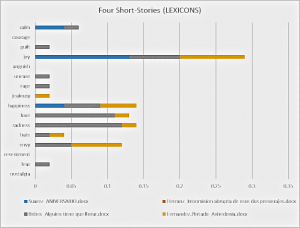 At the last seminar on Foucault’s lectures that are taking place at Columbia University (http://web.law.columbia.edu/foucault1313) , much talk was devoted to the notion that Foucault changes the focus on counter history of Society must be defended to a more modest (I would say, more realistic) notion on counter conduct in his lectures on Society, Territory and Population. This marks a move from the notion of State Apparatus to notions of governmentality. And it is linked to the history of government as the conduct of conduct. In order to evaluate and even notice how repertories in these short-stories deviate or defy the imperative norms, I went through Fidel Castro speeches in an effort to obtain evidence of its iterative force.

One of these short stories, “Aniversario” by Karla Suárez, is the reason I began looking at speeches. “Aniversario” occurs specifically on July 26, 1993. It is easy to know that because the short story mentions the speech by Fidel Castro Ruz marking the 40th anniversary of the assault on the Moncada Barracks. Hence, its name. I thought this piece of narrative offered an opportunity to evaluate political discourses vis. á vis. narrative discourse and explore the distribution of emotional lexicons used in both cases. Although predominant, joy and happiness are considered false impressions in the three stories that used the lexicons. These three stories happen to be written around 1993. So, I analyzed the most salient emotional lexicons in speeches delivered in 1993 here:

I paid specific attention to the trajectory of this emotion in Moncada Anniversary’s speeches over time. This event gives its name to the revolutionary organization 26th of July Movement which, led by Fidel Castro, in 1959 overthrew the Fulgencio Batista’s dictatorship in Cuba. Over time, the yearly commemorative speeches pivot around the relation between the event of the Revolution and the present state of the Revolution in the particular year:

And, later I wanted to zoom out to see a larger selection of 1990’s speeches:

Here is a similar graph with fewer categories (and in English) I created to evaluate possible relationships between the year in which happiness and joy surpass fear and its relative distance from “guilt” a concept intrinsically linked to an epistemology of the “New Man” in the past:

What do I want to quantify emotional terms for? What value could that possibly have? At the moment, I am only dealing with word quantifiers. So, what is the relevance of a stronger or lesser presence of words that account for affective processes? What is the significance of one emotion in relation to the totality of options? At the moment this does not have any statistical relevance. And probably, usefulness should not be determined exclusively by its scientific significance. I am thinking that, these graphics (see below) can be very productive in pedagogic terms. Not to show the unseen, as I originally believed, rather, to encourage class discussion by providing a visual food for thought.

The expression of the self, the affective processes or positive and negative emotions can be studied and compared to the student’s own categories and values. A good class starter is to begin by asking the two most relevant positive emotions and the two most significant negative emotions. This question could be placed having in mind a society at large, a particular community and/or solely personal terms, depending of the students, the culture, the institution, gender expectations, etc.

Lately, I have been preparing a text to present at LASA on the presence of historical events in the narrative of a particular group of Cuban writers  publishing after 2000. Just for fun, I wanted to evaluate Ahmel Echevarría’s mention of certain emotions and certain concepts I was evaluating. Of course, this lacks any scientific relevance. Nevertheless, I could envision its use in a class discussion on the works of this author. For example, we can see that the novel that most appeals to the past and the future is La noria, however, this observa 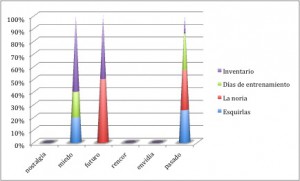 tion should not be an evaluation, and the results do not act as evidence. Rather, it could spark conversation as to the manner and the  resources cited while appealing to these categories. In La noria the past refers to the 1970s, a period of harsher censorship in Cuba and the future is often accompanied with references to Ricardo Piglia’s meta-literary reflections. A good analysis and class discuss could begin there. 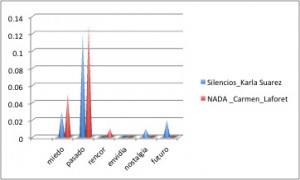 Part of my research is interested in the appeal to feelings that delimit the non-I, the other. I am particularly interested in the feeling of resentment as is used in post-war Spanish literature. My corpus of Spanish works takes the range 1945-1957 in order to consider a shift marked by Frank Biess and Daniel Gross: “Leading social scientists’ association of Nazism with excessive emotionalism further enhanced the marginalization and deep suspicion of them… This predated the post-war period, but assumed a new meaning after 1945. Emotions, at least as far as they were visible and operative in social and political life, appeared largely as symptoms or causes of political and social pathologies…”[1] (Science and emotions… 1-2). The Falangist party in charge of cultural policy during the first Franquism had to promptly redirect ideological affinities away of Nazism. If so, I should expect a change in the emotional regime. More to follow…

Nostalgia seems to have a higher frequency in Cuban works of the 1990s and “resentment” is appealed to profusely in works of the Spanish post-war. While envy is not nonexistent in Spanish works, the pair envy and resentment is, [to my understanding given what I have researched so far] consistently more common in Spanish works, and it used often to invalidate the self of the enemy. As Sianne Ngai has noted: “This invalidation is most powerfully exemplified by envy’s integration into the nineteenth-century ideologeme of resentment: the diseas 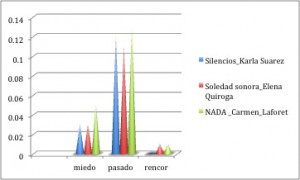 ed passion that enabled the discrediting of genuine political impulses by ascribing them to ‘private dissatisfactions’ or psychological flaws”[2] (Ugly Feelings 128). Envy appears to have other function or other value in my other corpus, but I still need to test this hypothesis.

Food for thought (with links)

The dark side of subjunctive

This segment helped me to rethink the connection between the linguistic and the epistemological of my study. Besides that, I am thinking of assigning it as a sort of extra credit activity (which I never ever offer), just to give my students a reason to listen to it.

Emotions, gender and the workplace

Jully Hogan presents her book Moody Bitches… and talks about the needless consumption of medication being used to avoid “emotionality” [my term].

I was amazed by the bluntness and clarity of one of the listeners: “If I cried in my work, I would be fired”. Another, a former actress, “used to have emotions available” as she put it, discussed the derision, the condescending attitudes and the physical responses to a person crying she encountered. We have moved from boys don’t cry to efficient people don’t cry. And, even worse, to successful people is always cheerful; smiling is not an option, it is a mandate. Those are part of the contemporary emotional regimes existent today.

In a training at Reading Partners, one of my colleagues commented on one of her students, having trouble expressing her emotions. A poster in one of the rooms with the huge tittle of “Feelings” encouraged the gaze to recognize our own. Aren’t we preparing students for a nonexistent society? The dictum of know your self serves here to identify… can we express what we identify or only identify it?