Silences of NY History: Legacies of The New York Slave Revolt of 1712 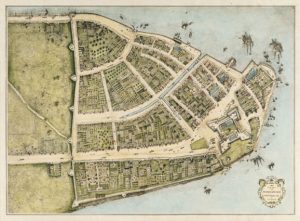 My capstone is centered on black history in New York City. By using the New York Slave Revolt of 1712 as a case study I want to create my capstone project as a digital timeline of the historical context of the event and the aftermath it had on New York City with the hope that in the future I am able to expand this project on other events of black New York history along with a mapping component to lay it out. But for right now this timeline will also double as a resource guide of primary and secondary sources that will support the historical context as well as give open access for the viewer to learn more about the city’s slavery history.

By using the first instance of a black uprising in New York City in this capstone, I hope to bring forward a chance to study the reasons and actions why history labels this as the slave “revolt” along with the historical and social context that can be further explained through the use of various sources. Through this method, the goal is for the experiences of the enslaved peoples of this event and those to come afterwards to become palpable.

Overall, I envision Silences of New York History to further uplift the rapidly growing scholarship of the historical study of slavery and the lasting effects it has on America’s relationship with its black citizens. I hope to encourage more open dialogue about the way that our fundamental social structures of New York City society today are rooted in the power hierarchy of colonial slavery and racism and highlight the power and humanity in those black New Yorkers that put their safety and lives at further risk in order to use some form of activist tactics as an expression of their pain in bondage and inequality in the colony.

Although there has been a lot of progress made in public acknowledgement to the city’s dark history in academia, literature, multimedia, and cultural institutions, there is still more work to be done. More accessibility to this history can give future generations of students, especially those who are black and brown, to explore these legacies and the way they trickle down in various social aspects throughout the centuries and into their own lives. Ultimately, this project seeks to further encourage the shift in critical understanding of our society’s current state and give power tools to those wanting to learn more of their own history.