Venereal disease (VD) was epidemic in the early twentieth century; estimates were that 1/10 people would contract syphilis at some point in their lives and even more would get gonorrhea. In spite of these startling facts, VD remained a taboo topic because of the stigma associated with these diseases. Stereotypes about race, class, and gender along with ideas about morality shaped popular attitudes about these illnesses, which limited public and financial support for public health control programs.

However, in the 1930s, popular attitudes about venereal disease changed dramatically in the United States. Syphilis and gonorrhea became topics that people commonly encountered in their everyday life—in all types of media, at work and school, and in a multitude of public spaces. While Surgeon General Thomas Parran made “stamping out” syphilis his pet project during this time, the cause also had widespread support from Congress, medical and public health professionals, social organizations, the press, and the general public. 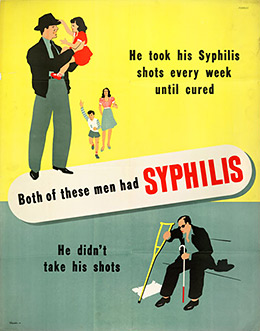 The Venereal Disease Visual History Archive is a project to present and make available visual culture materials related to syphilis and gonorrhea from the first half of the twentieth century. Visual materials were a significant part of efforts to control VD because they were engaging and could reach a wide audience. I collected the items included in the archive as research for my dissertation on the campaign to “stamp out” VD in the United States during 1930s and 1940s. These visual sources are scattered among a variety of digital and traditional archives. One purpose of this project is to bring these materials together in one place so researchers, educators, and students can access them easily.

The other purpose of this project is to present some of my own analysis of the themes, iconography, and rhetoric used in the visual materials created for the campaign against venereal disease. While many scholars have focused on campaigns against prostitution in the Progressive Era, VD policies and practices during the World Wars, and the Public Health Service’s Syphilis Study at Tuskegee, the New Deal is often overlooked in the scholarship in spite of the momentum this issue gained in the 1930s. I hope to address how and why VD control became popular in this period. I argue that Parran and others were able to tap into issues that had great salience during the Great Depression and WWII in order to gain widespread support for the expansion of public health venereal disease control programs across the nation.