What They Saved: Pieces of a Jewish Past

Nancy K. Miller, English and Comparative Literature
Project Website: What They Saved: Pieces of a Jewish Past 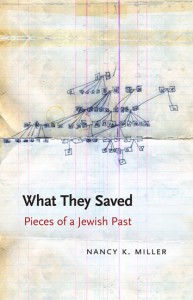 What They Saved: Pieces of a Jewish Past is the story of how a daughter reconstructed her family’s missing past from a handful of mysterious objects passed down from her father. This project is an extension of the book that was released in September 2011. The strange collection—locks of hair, a postcard from Argentina, a cemetery receipt, letters written in Yiddish—moved her to search for the people who had left these traces of their lives and to understand what had happened to them. As I—that daughter—slowly pieced together my family portrait and assembled a genealogical tree, I began to feel connected in unexpected ways to an immigrant narrative that began in Eastern Europe at the turn of the twentieth century, when my father’s family headed for the Lower East Side of Manhattan. At the end of this decade-long quest, I could not help but fantasize about the life I might have had I known the missing side of my family—uncle, cousin, great-aunt, great-uncle. Suspended finally between what has been lost and what I’ve discovered in working on this project, I’ve had to come to terms with the bittersweet legacy of the third generation—enamored of these tantalizing fragments of disappeared worlds.

The objects, including photographs of people at first wholly unknown to me, found in my father’s drawer after his death are at the heart of this project. In the book, twenty-five of them appear in the chapters as subjects of meditation: who were these people? What led them to reinvent their characters as Americans after their lives in Russia? How much can we trust the pieces of evidence that they might or might not have intended to save? Who, indeed, saved what? My father? His mother?

On the website constructed in the New Media Lab, where we can study the objects in color, we invite others to share comparable legacies. My hope is that by making available the process of my quest, I will encourage others to pursue their family histories. The website also offers a visual record of my “roots-trip” to Ukraine and Moldova, images that I was not able to include in the book.