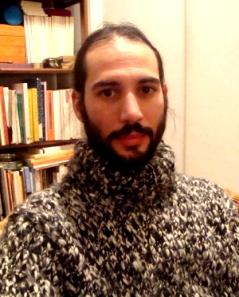 Marcos Wasem (Montevideo, 1977) is a Ph.D. candidate in the Department of Hispanic and Luso-Brazilian Literatures and Languages at the CUNY Graduate Center. He studied Literature at the Instituto de Profesores Artigas, in Montevideo, Uruguay, where he graduated in 2000. He then moved to Israel, where he earned an M.A. at The Hebrew University of Jerusalem on the poetry of Argentine writer Néstor Perlongher. In 2004, Marcos Wasem took part in the Curso superior de filología para jóvenes hispanistas, in Santander, Spain. In 2005, he moved to New York and is currently an instructor at the City College of New York, where he teaches Spanish Language and Contemporary Spanish Poetry. He published a book of poetry, Aterrizaje de primeros semovientes, (Montevideo: Artefato, 2007), and the essay Sublime y barroso: poética para Perlongher (Buenos Aires: Godot, 2008). His current research at The Graduate Center is on Modernista poetry in Latin America, and the way different forms of media that appeared during that period affected poetic writing. Marcos Wasem has served as editor and designer for LL Journal, and as webmaster in the Ph.D. Program in Hispanic and Luso-Brazilian Literatures and Languages. He is also interested in the possibilities that open source applications and software provides for artists and academics.