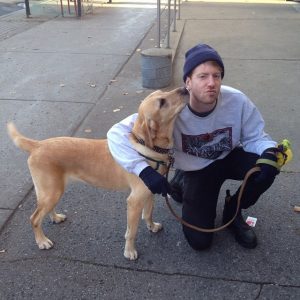 Sheehan Moore is a doctoral student in anthropology at the CUNY Graduate Center and labor relations coordinator at The Adjunct Project. His current research focuses on climate change and land loss in southern Louisiana. This work is situated within a broader interest in spatial dimensions of political contestation – the ways that spaces are claimed and re-defined by protest, social movements, and other forms of political action. In a Radical Anthropology article (PDF) building on his undergraduate thesis work, Sheehan approached these themes through interviews with students who occupied university offices during the 2012 Quebec student movement protests.

In coastal Louisiana, where land loss is accelerated by climate change and industry-related subsidence, claims to present and future spaces acquire an additional urgency – mobilizing communities while also multiplying opportunities for intervention by state agencies and private capital. At the New Media Lab, Sheehan’s project examines the role of predictive mapping, which attempts to model changes to the landscape over coming decades. It asks after the data and ideas that go into creating these images, as well as the contexts (news stories, NGO reports, community planning meetings) in which they circulate. What inclusions and omissions make these maps possible? What contingencies or uncertainties do they smooth over? And finally, how might these and other representations of climate futures shape the parameters for collective action?

Sheehan received his B.A. from McGill University in 2013, and has worked as an academic labor organizer in Montreal and New York since 2010. He has also written on bioethics in neuroscience and worked on the Standing Rock Syllabus collective.