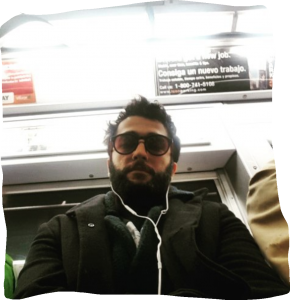 In my work, I research the ways in which temporality and historicity become the object of political rationality by drawing on the recent cultural, reflexive, affective and finally nonhuman turns in social theory. Specifically in my dissertation, I analyze News Feed (of Facebook) and Stories (of Facebook’s Instagram) as two cases of the Will to Temporalize -original and metamorphosed ways (feeds and narratives) in which time, affect, memory are brought to the digital sociality.

I provide an extract from Richard Dienst’s Still Life in Real Time: Theory After Television (1994) as an essential genealogical reference point for my project:

“The ‘consumption’ of television in terms of time “possesses the peculiar property of being source of value,” as Marx says of labor*” (p. 62)

*”Marx, Capital I. 270. To illustrate the analogy, I should quote the passage at length. ‘In order to extract value out of consumption of a commodity our friend the money-owner must be lucky enough to find within the sphere circulation, on the market, a commodity whose use-value possesses the peculiar property of being a source of value, whose actual consumption is therefore itself an objectification  (Vergegenstanlichung) of labour, hence a creation of value. The possessor of money does find such a special commodity on the market: the capacity for labor (arbeitsvermogen), in other words labor-power (Arbeitskraft)’ Hence the peculiar property of watching television is that time enters into a cycle of value without being treated as commodity by those spend it. The networks, then, appear to act as broker who make value as if from nothing: they simultaneously “buy” (with images) and “sell” (as ratings) this socialized time. It should be remembered that this commercial system is undoubtedly limited, historically and geographically; as soon as it becomes more technically and economically feasible, images will not be offered without direct lines of return, i.e., having viewers pay for one kind of time (image time) with another (money, i.e., labor time).” (p. 179)

Given such transformations of the conditions of possibility of subjectivity, I approach to the literature on ‘catastrophes’ of 20th century where philosophers/artists offered the concept of an event-without-a-witness. With this concept they challenge evidence based access to the reality given the fact that modern power often operates in a way that destroys the evidence of its violence. Then one is asked to engage in an extremely difficult task of phenomenology of the survivor. I think here philosophic and historic trajectories converge on the question of the ends of humanism. Drawing on this debate, I reflect on the processes of normalization and the dissonances between the human and the nonhuman temporality.