Broadway musical theatre is the most distinctive US form of theatre. Between the 1920s and the 1960s, works by Kern, Berlin, Gershwin, Porter, Rodgers and Hart, Rodgers and Hammerstein contributed largely to the formation of US culture. Contemporary Broadway musicals continue to be consumed every year by millions of theatre-goers, and appreciated and performed endlessly by fans all over the world. The theatrical genre synonymic to “US theatre,” Broadway musicals remain one of the barometers of US culture.

There has been a considerable gap between public and scholarly perceptions of Broadway musical theatre, both synchronically and diachronically. How should one measure, especially in the digital age, the canonicality of a musical, considering both its levels of popularity and critical success? This project examines the making of the Broadway Song Machine–hidden formulas of songs from “hit” (here defined as canonical) musicals, which keep shifting in the context of socio-historical and cultural transformations, and explores different ways of visualizing it. Bridging cultural studies and musicology with digital approaches, I reassess the concept of “hits,” examine how minoritarian characteristics have always been present in the Broadway Song Machine, and propose potential modes of predicting “hits” digitally. 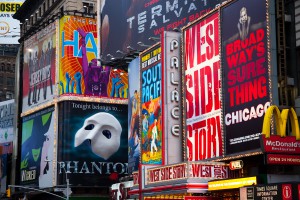 This project gathers musical and lyrical data from musicals since the 1920s; runs comparative data analyses of crucial indicators such as song forms, musical idioms, and recurring topics. The end result will be a pedagogical tool in the form of an interactive website. The target users are teachers and students of Broadway musical theatre, musical theatre fans, scholars, practitioners, and the general public who are interested in looking into the ways of visualizing the Broadway Song Machine.