Medievalisms on the Radio: A Premodern Podcast 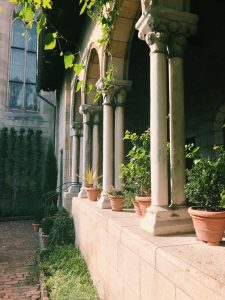 In contemporary society, we call a wide variety of objects, ideas, and values “medieval”. But what do we mean when we say this? Usually the term “medieval” refers to one of two things: literally, something from between the years 500 and 1500 AD, and, figuratively, something outdated, barbaric, or simply removed from the reality of the here and now. But as the work of scholars like Jennifer Borland, Jeffrey J. Cohen, Dorothy Kim, and many, many others reminds us, “medieval” objects and ideas that exist today are also, always, contemporary: there is no way of viewing a reliquary, a Viking statue, or a poem about the Crusades in the modern day without looking to, and through, our modern politics and social concepts.

This project builds on these literary interventions into medieval studies with an auditory one: a podcast focused on objects, ideas, and themes related to medieval culture that can be observed in New York City today. These topics might be as concrete as the Fort Tryon Medieval Festival, a prime example of medieval culture turned into modern spectacle, or as abstract as apocalyptic ecology, seen in medieval treatises on the seasons and in the work of modern climate activists in Central Park. This podcast is intended as a public humanities project with the intention of introducing more people to less widely known aspects of the medieval period, and their relevance to both non-scholars and academics today.

This audio project can also be used in the classroom as an alternate “text”, or as a learning tool for students who prefer to absorb information by listening rather than reading. Medieval studies as a discipline has historically been slow to adopt technology for facilitating learning, and of the relatively few medieval podcasts in existence, most are focused either on religion or military history. As someone who researches medieval science, medicine, and disability, and pop cultural representations of the medieval period, I am invested in showcasing the many different aspects of medieval culture and scholarship that are typically ignored or unrecognized. Ultimately, however, the main intention of this project is to make clear connections between the medieval world and modern society, showing the continued relevance of ideas that existed in medieval culture in our everyday lives.