Like anyone with eyes open struggling through American life, poets Edward Dorn and LeRoi Jones (later to become Amiri Baraka) long saw and felt the effects of the horrors of World War II and all of its fallout. These writers were part of a wide-ranging group emerging at the forefront of mid-20th century radical thought, leading the way in a poetics that embraced poetry as a key means to understand and affect the world around them. From 1959 until 1964, Dorn and Baraka sustained their friendship primarily through copious letter-writing. The major basis of their relationship is without a doubt an artistic one, the early 1960s finding both poets just beginning to publish and become active, public figures. A look at the complete set of letters finds them formative and showing signs of what is to come later: by 1965, knowledge, beliefs, actions, friendships and alliances have shifted drastically, setting the stage for a highly tumultuous late 1960s. This complicated friendship, particularly as seen through its letters, is a revelatory one, leading the way to further insights into our understanding of the 1960s (and, implicitly, American history preceding and following long after this period). As both historical and autobiographical lens into two key writers at the very pulse of the turbulent cultural and political happenings of mid-century America, these letters reveal an extraordinary snapshot of American identity and history.

The continual and necessary compromise of edited vs. actual letters led to the creation of this space, an online exhibit and resource center. Here, scans of each letter will be easily accessible and available, in order that readers can experience the letters as they were originally written. Additionally, this digital version will contain annotations in hypertext that will include links to various pages both internal and external to the site, widening the net of available information, including text, images, and sound. Interactive timelines are being created for each author, creating a visual counterpoint to the letters. A user forum will be established for both conversation and input of materials and data. A work in progress, Renegade Poetic America can grow exponentially from two poets over a five year span, the site being designed so as to easily absorb any number of new poets, artists, activists, etc. over many years. Eventually this will be a comprehensive database that can be easily accessed and cross referenced, creating an adaptable, live web resource for poets, scholars, and the curious. 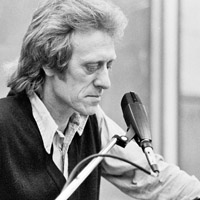 EDWARD DORN (1929-1999) was born in the poverty-stricken Illinois of the Great Depression, forever marked by the circumstances and land from which he came. Intellectually hungry and always dissatisfied with the status quo, Dorn spent several years studying with Charles Olson, both in and out of Black Mountain. Dorn engaged in sharp, critical inquiry in an attempt to push into motion what he knew was a too-often complacent country. His frankness landed him the dubious honor of, in the words of fellow poet Tom Raworth, “a lonely position at the best of times” a persona non grata.” In the Summer 2004 special double issue of Chicago Review dedicated to Dorn, editor Erik Steinhoff understands that though “Dorn should need no introduction” given his location in the radical and powerful lineage of “the Black Mountaineers arrayed under and around Charles Olson’s decisive influence” it is also understandable that Dorn would need an introduction.” Deemed a ‘difficult’ poet and man by many, Dorn’s work “functions as a department of disturbances, running athwart whatever linguistic, political, or cultural securities or sincerities we might hold.” Dorn spent his life writing, teaching, and editing as he traveled between England and North America; he would accept a position at the University of Colorado, Boulder in 1977 and remain there until the end of his life. 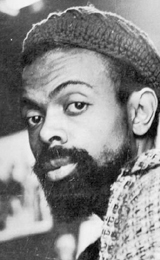 Newark, New Jersey-born Amiri Baraka (b. 1934) is a poet, writer, dramatist, and activist. Rejecting his lower middle class black lifestyle and receiving a dishonorable discharge by the Air Force (the Error Farce, in his own words), by 1958 Jones had ventured to New York City, where he spent many years in Greenwich Village, an integral participant in the bohemian poetry, theater, and music scenes. Baraka would write in a wide range of artistic forms, including poetry, plays, essays, reviews, even liner notes for the jazz records coming out of the artistic ferment of the mid-twentieth century music world. Having seen several poems of Dorn’s in various small literary magazines, Baraka began writing to him with praises and a request for poems for his own magazine, Yugen. This was the first little magazine to include all the various groups that would come to comprise the New American Poetry; the Beats, the Black Mountain poets, and the San Francisco Renaissance poets, among others, were all featured. In 1965, after the death of Malcolm X, Baraka moved uptown to Harlem and founded the Black Arts Repertory Theatre, a key part of the Black Arts Movement. Baraka has since returned to Newark, continuing his works in the arts and as an activist.

Lost & Found: The CUNY Poetics Document Initiative emerges from archival work and contemporary textual scholarship being done by students at the Graduate Center of the City University of New York, with the generous support of the Center for the Humanities. Forming part of the Living Archives Project, the Initiative will publish work done by students and scholars at the Graduate Center, as well as visiting fellows and guest editors.