Whiteness as a Technology of Affect in German Digital Spaces 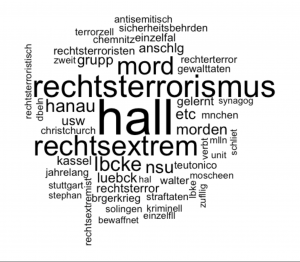 This project examines how whiteness is discursively constructed in German digital spaces and in everyday speech. In Germany, whiteness is not recognized as an identity identifier by the majority of white Germans. The investment in maintaining whiteness as neutral is exemplified by the color-blind attitude white Germans actively hold on to (Eggers et al, 2009). Fatima El-Tayeb (2011) describes how white Europeans racialize others and themselves through the lens of whiteness, blackness and of color, but do not recognize those racialization processes thus thereby reproducing invisibility and “enforced silence” (p. xxviii). Through claiming “colorblindness” as evidence for not being racist, white Germans reproduce racist structures and hierarchies by ignoring them and making it impossible to name the reasons and consequences of racialization processes (El-Tayeb, 2016). Colorblindness contributes to racist structures by invalidating people’s identities and their experiences of racism as well as by hindering the tracking of racial disparities.

German scholarship on critical whiteness only began in the 1980s when researchers, many of them Germans of color, began studying the process of racialization and racism by analyzing the social construction of an Other through marking them as biologically or culturally different from white Germans (Mecheril, 1997, Ayim, Oguntoye & Schultz, 2006, Rommelspacher, 1995, Ofuatey-Alazard, 2011). Outside the academy, Germans of color organized and theorized their oppression at least as long as the 1980’s when Audre Lorde, a queer black American feminist inspired consciousness raising and community building of black German woman (Ellerbe-Dueck and Wekker, 2015). However, this activism and scholarship has not reached mainstream academia, and only in recent years has it slowly entered public debates. The German context requires specific analyses of its different forms of racism and construction of whiteness.

This project aims to give insight into the construction of whiteness in Germany by focusing on the affective and embodied technologies of whiteness (Hook, 2005; Leonardo & Zembylas, 2013, Schmitz & Ahmed, 2014), It utilizes data from digital spaces and focus groups to examine the role of the politics of emotions (Ahmed, 2013) in their construction of whiteness. The first investigation of German online discourses of this project is on the #Hanau on German-speaking Twitter. This hashtag refers to white nationalist shootings that took place in Spring 2020 in Hanau. In addition to examining the affective technologies of whiteness, this project is interested in learning more about the construction of memory culture in Germany and how the past is remembered and constructed through hashtags such as #neveragain.

Friederike has presented this project with her colleagues Nga Than and Maria Rodriguez in two conferences: The 2020 Annual Scientific Meeting of the International Society of Political Psychology and Stanford’s 2020 Conference on Computational Sociology. These presentations have focused on two themes that have come up in the computational analysis of German twitter data in response to the Hanau and Halle shootings: Germany’s discussion about racism and the expression of solidarity. In addition, Friederike, Nga Than, Krystal Perkins, and Maria Rodriguez submitted their paper on the Hanau shootings to the British Journal of Social Psychology and have been invited to revise their paper which examines German-speaking Twitter’s reckoning with race and racism in response to the Hanau shootings.