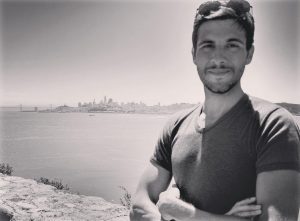 Stefano Morello is a doctoral candidate in English at the Graduate Center and a Teaching Fellow at Queens College. He holds an M.A. in American Literature from the University of Naples “L’Orientale” and an M.A. in American Studies from the University of Torino. His academic interests include American Studies, poetics, popular culture, modern and contemporary American literature, queer theory, and transnational screen cultures. Three years into the program, he is mostly interested in youth subcultures and their capacity to produce and circulate subjugated knowledge – he is currently committed to exploring the heterotopic space of punk feelings, its modes of resistance and (dis-)association, and the odd clashes between its politics and aesthetics.

Stefano is co-chair of the Graduate Forum of the Italian Association for American Studies (AISNA) and founding editor of its journal, JAm It! (Journal of American Studies in Italy). He is also co-curating an exhibition at the Municipal Archives of the City of New York – based on his yet unpublished M.A. dissertation – on a neighborhood on the Lower East Side subject to a process of slum-making during the Progressive Era. In 1903, social worker, future novelist, and Pulitzer Prize winner Ernest Poole labeled this area “Lung Block,” due to the prevalence of tuberculosis. However, several public records show that the block was by no means the most disease-ridden in the city. The exhibition exposes the discrepancy in the public narrative and the archival records, and examines the motives and results of the slum clearance efforts at the Lung Block. Set to open in the fall of 2018 at the Municipal Archives of the City of New York, the initiative aims at being an occasion to reflect on the public history of the city, the ongoing gentrification of many urban areas throughout the country, and the perpetuation of – forgive the anachronism – “alternative facts.”

He wishes he spent more time writing poetry and hanging out at the Poetry Project.